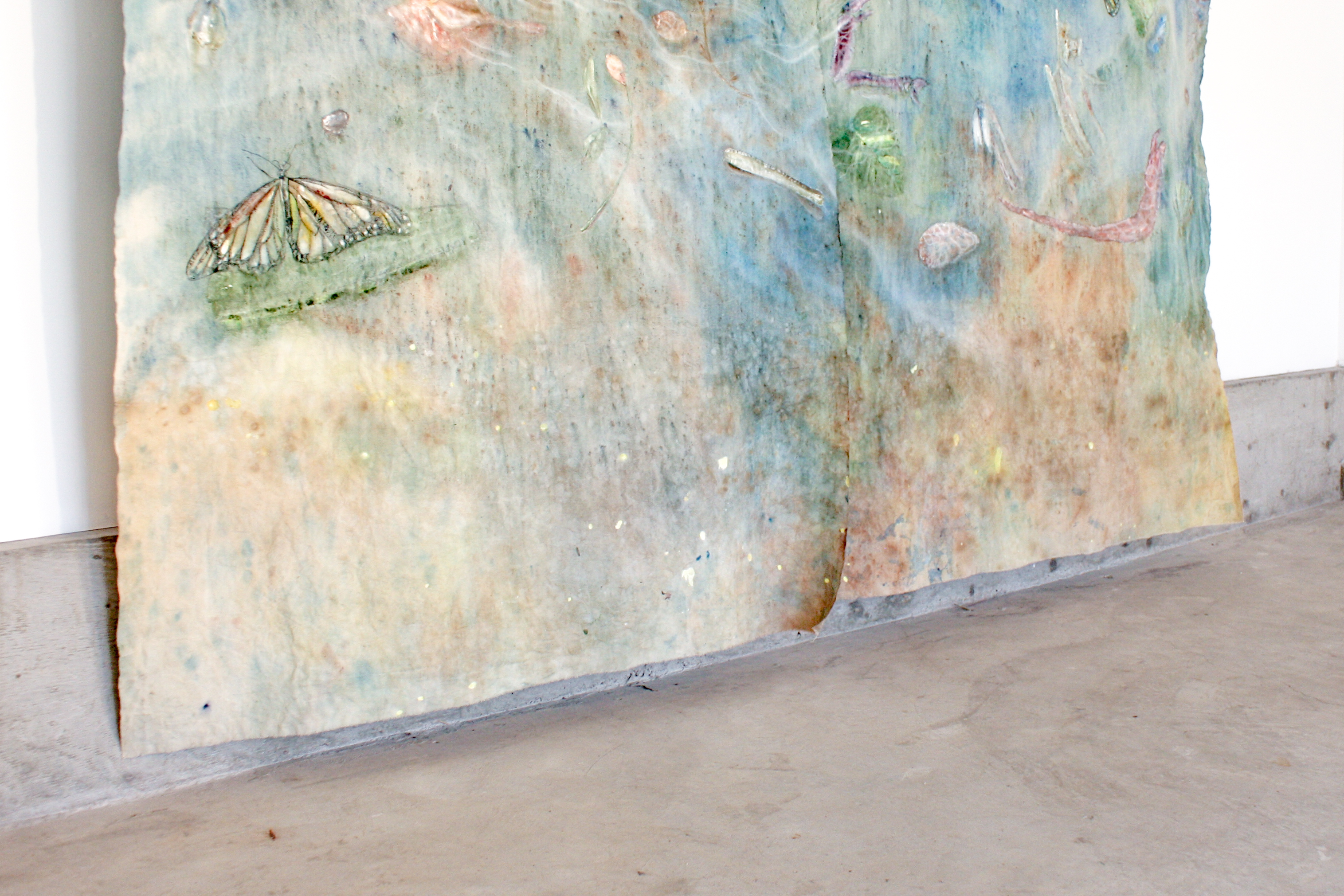 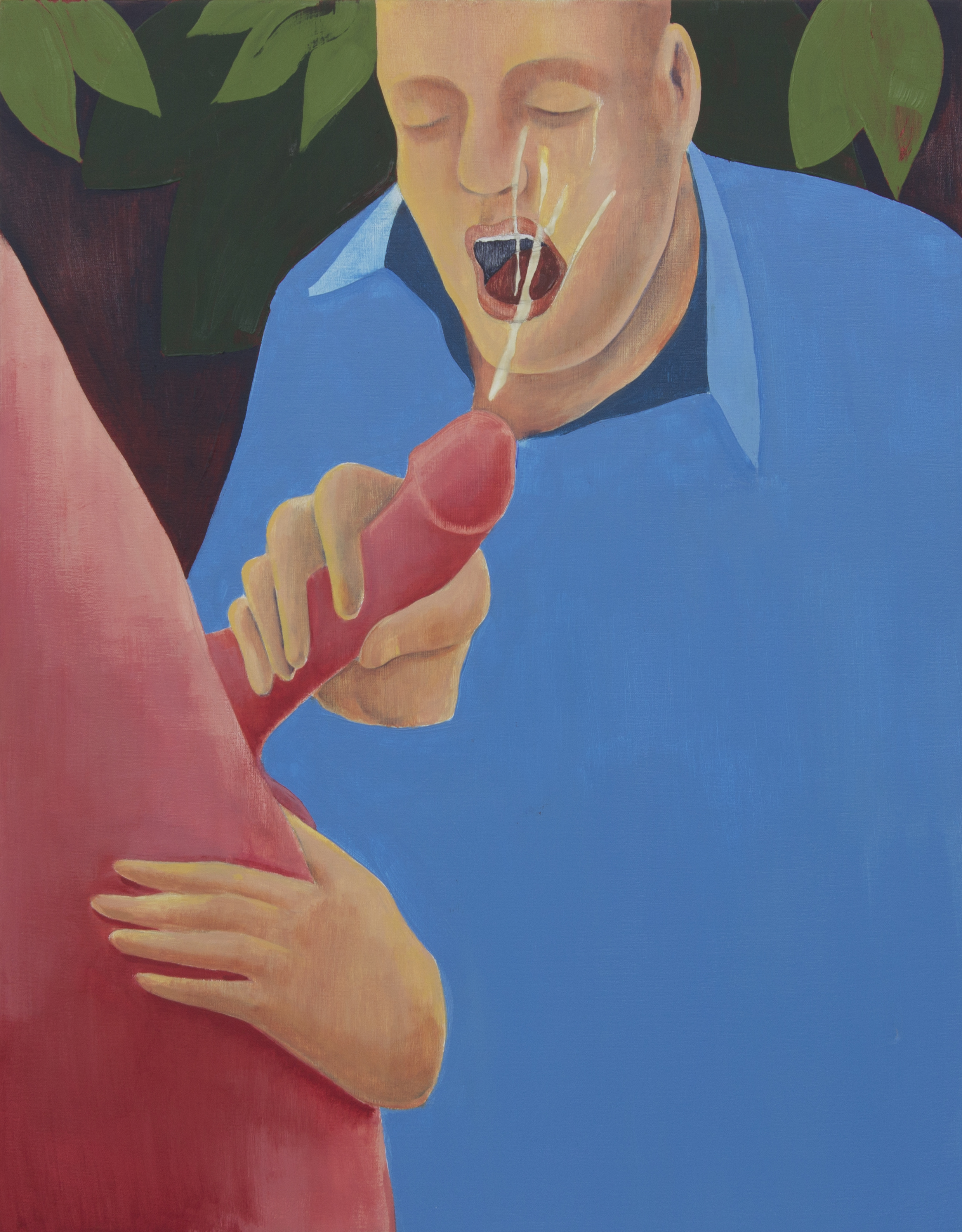 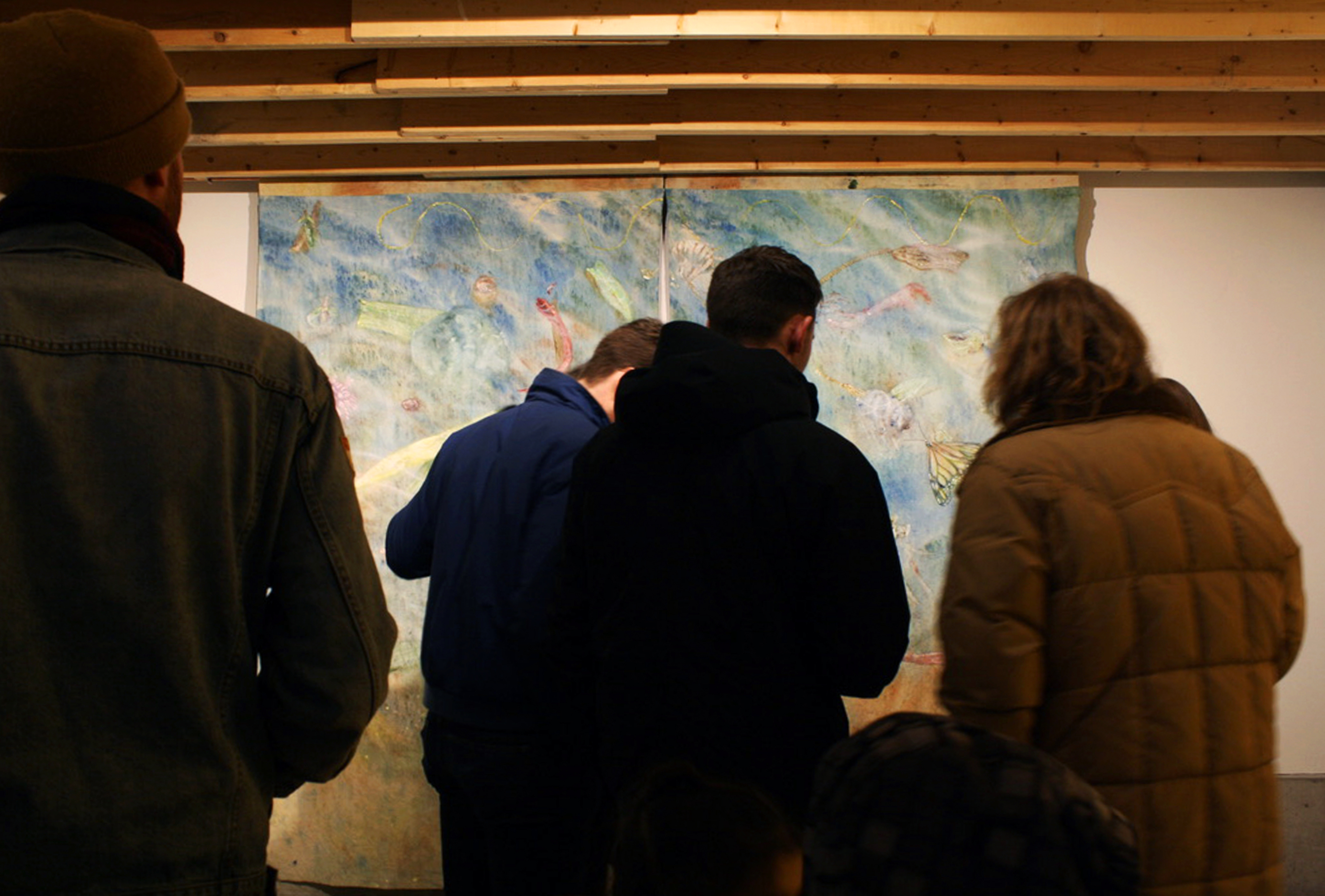 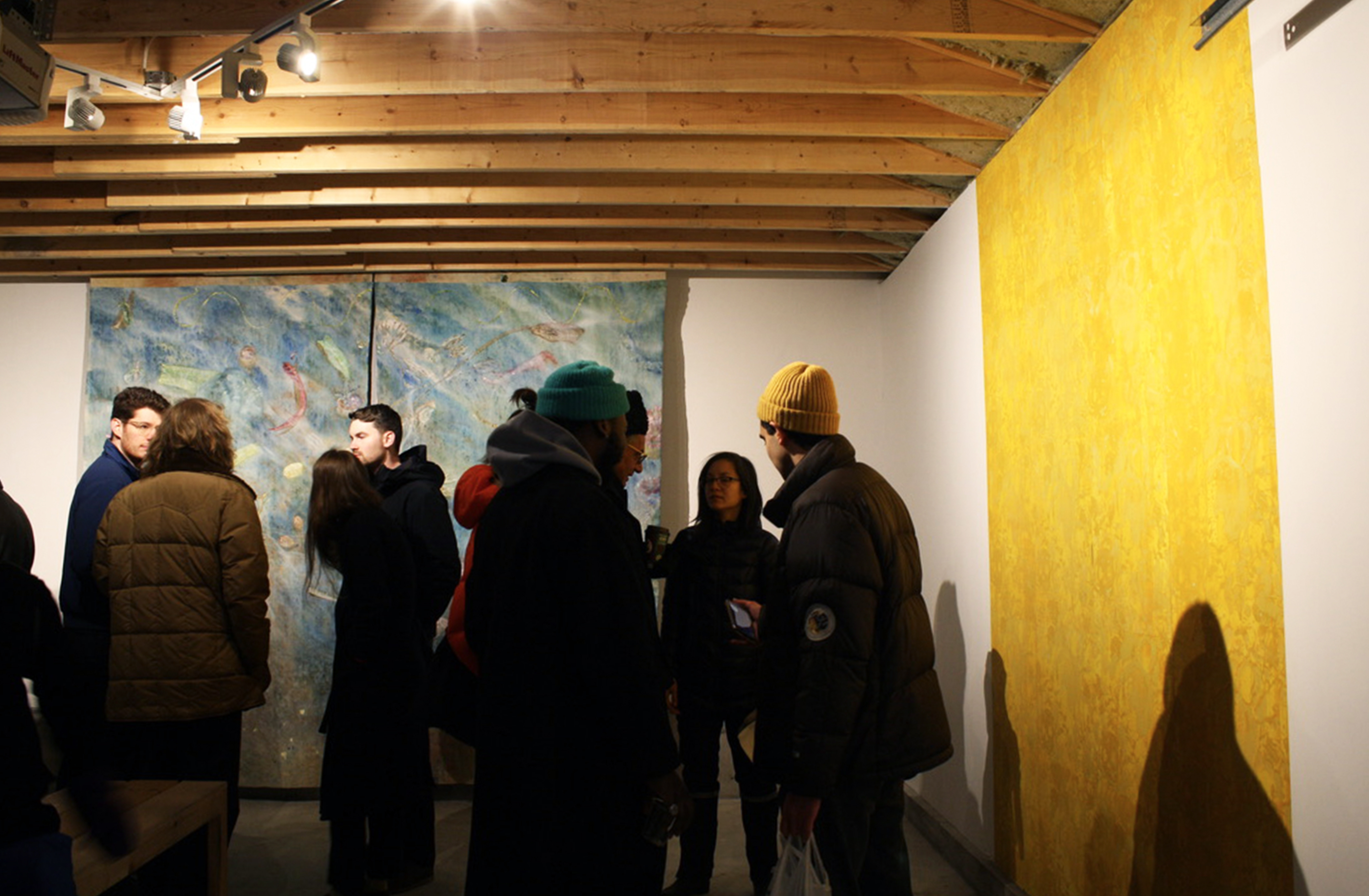 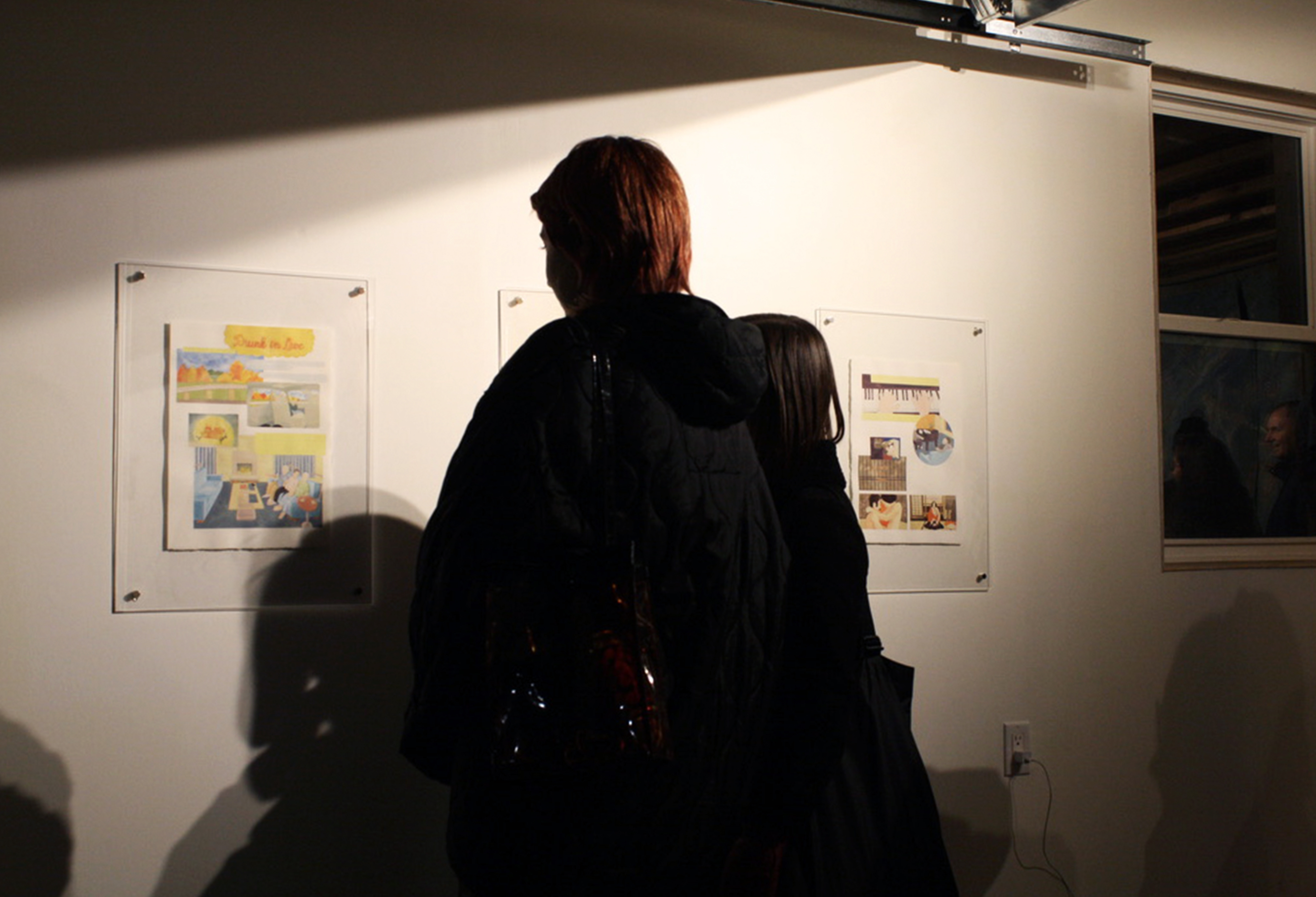 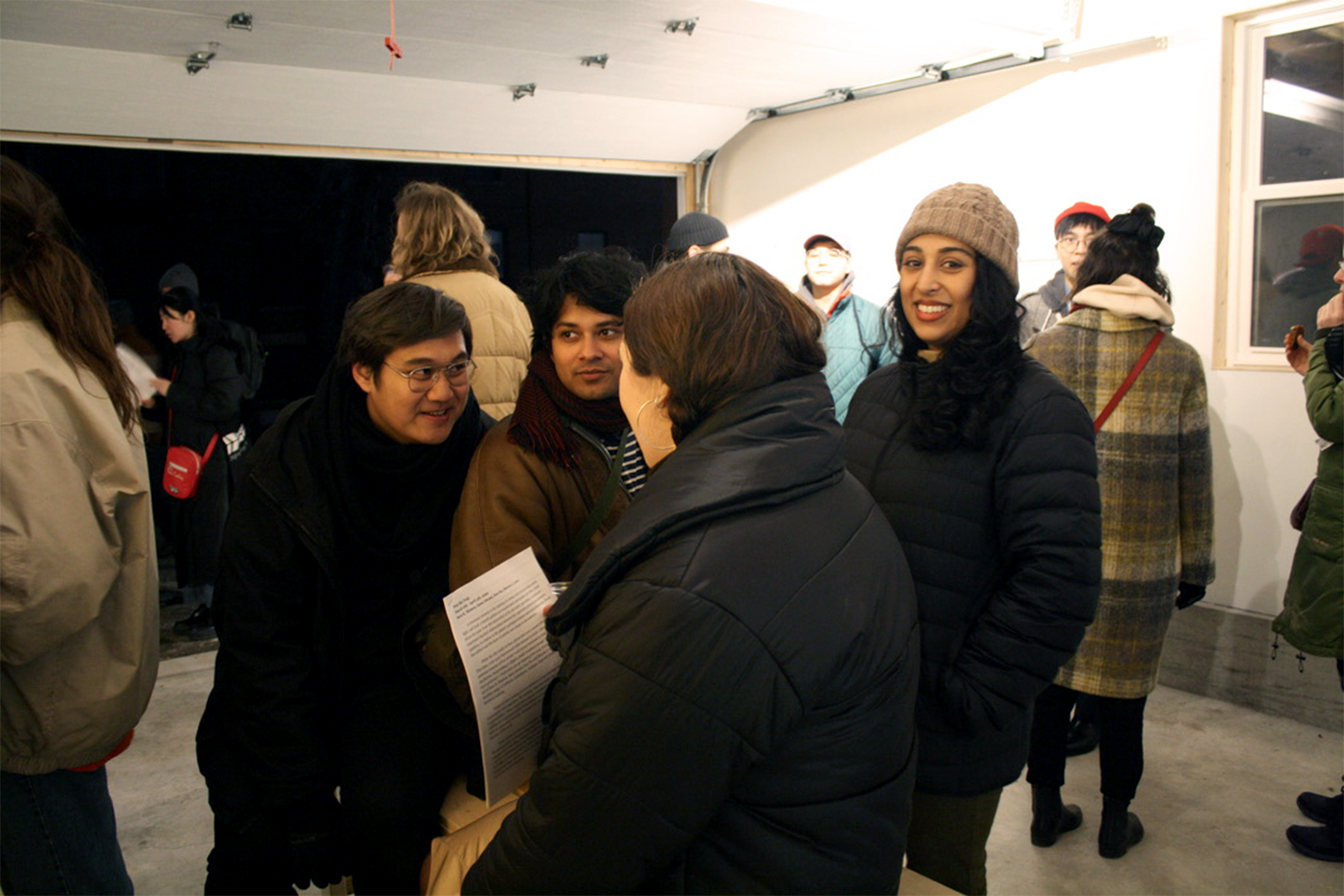 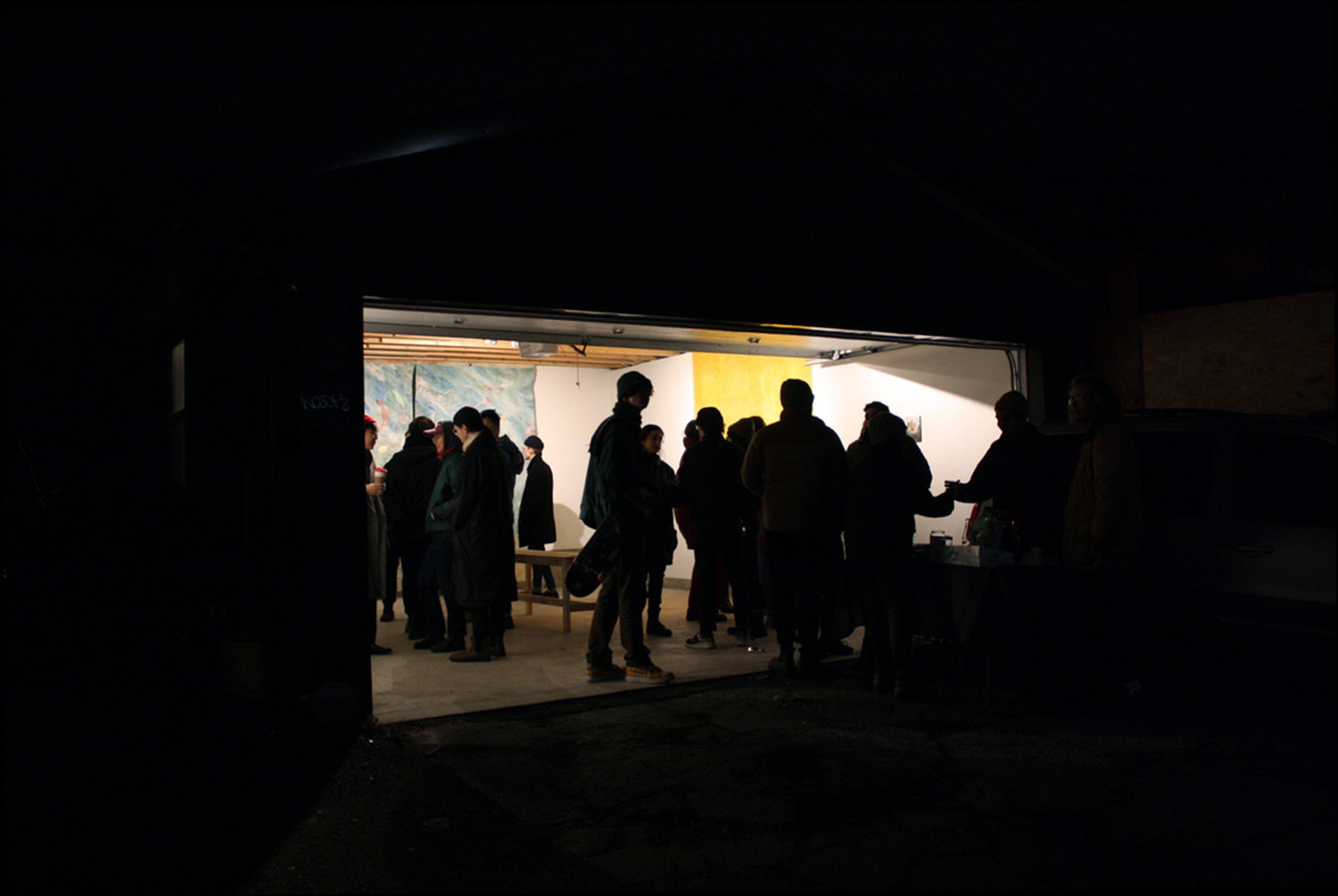 While the city swells in thaw, please join us in a second circle around the fire. This time, come gaze heavenward while fastened to Earth. Collected here are the material remains of four artists’ work forever burdened by longing - stories of life’s mediation. Responding to Elijah’s dually translated prompt “How long halt ye between two opinions? / Until when are ye hopping from twig to twig?” (1 Kings xviii. 21), the art of Sara K. Maston, Sami Alwani, Ron Siu, and Shevon J. Lewis offers hints along a familiar range of stillness, hesitations, missteps, leaps and rhythms we embody in decision making.

Traces of their aching are assembled as if from intuition beyond phenomenal appearance and cognition. By working, hope and doubt fuse as struggle rooted in responsibility. These expressions are accomplished without banking on intent and settling for responses pulled from history’s inventory. Rather, our artists’ experimental faith is concerned with the consequences of actions - world building for the eternal destiny of the soul.

These works are lyrical, and in this imaginative moment they become prophetic. The serious play of creative expression demonstrates a primordial kinship with the exigency of foretelling. Instead of only accommodating the mechanics of what has been - and in so defining potential identity and collectivity - these pleas enunciate hope in the folds of moments still to come by force of interruption. Their songs are not blueprints from which to build, but future’s filaments smuggled into the present. Here, we do the future together.

Saturn Roots Ramble in a Wandering Way
for Sara

Snowfall soul is the swerve of the body, so spiral
your winging double without the two halves born twins
a shadow copy of one another clenched too quick & the quickest
dead. You taught me a hole dug last year eats its backfill in trash,
dumb eyes watch it all happen, there is earlier time for rosyness between
truth even today when your silence beat the first I uncorked under
a week’s roygbiv arc. Old stars buried in their pool burn in the mantle
We are specks tenseless. Slug heartstrings tied a shoe tree pegged out some
county road, cars sound hard yet stay organized. I hate this lattice, grew to
I fold in far too close, parched & forgot water foolish so the bucket
is dropped down in some factorial tide. To my senses I write all possible
permutations my soiled clues nothing against a swamp’s long ripples.
Waves go hungry today, Sun shoreline an augured limb of heavy pores
Tonight the stars draw a circle for you

Does this event belong to a situation? Uncertainty we worked for
Barely underhand, some pleasures jump past threshold & leap to release
dumb immediate rotten joy. Heaps ‘n nothing except brothers remembered
in circular motion: making sure of and best of both. New riches sprout but
‘I wish I could believe that’ is cowardly, some pleasant spectator once faceless
body now sprouting the pale disease of a season’s floral arrangement
Instead, daisy chains in autumn woozy gravity, picked sharing love as relations
That will not grow watery, Gun Oil® spread over wide planes clings just as fierce
All hands cup security and success an image of splendour a-go-go abcd all the above
in the heart. Questionable substance? According to who? Nobody can know
but you till carbonated haze wears off to responses modded on another’s behalf
who will be with us as they might be with us? Unwound over phone kinks never iron
out so champion your embrace; the call for enduring that spurt thrice removed
The link is what we do, the knot is who we are

Venus Roots Burst Fast So Quickly and Freely
for Ron

Peachpit drift of synthetic horns sound sombre,
study hall chordage through a heart’s spit interface
Playmate smell dipped into grains where space greets work
Memory box, memory box who’s corners hairpin in paste
to crumple up at edges of flatlined situationships yelled
That glance from you was all it took all it ever takes
to make my mind shake wild with mire - place pushes
back, a curve’s blush is the eye’s way of saying I love you back
He watches your own span grabbing pressed flower camo
That’s your impression, light-dark, fading unresolved until
I rest against that wall again, a brain bouquet so thorny
Traces where your plays mucous ruckus long the spark
twostep to the second name of being, being still
Sleep will come back & wager a name more secret

Float or tunnel a toe deed made to copy the everlasting outside yourself
Look above! Torn from a diary hung an image that changed by the minute.
Sometimes an umbrella from below then an eagle with splayed wings so nameless
just over the horizon, shifts into wisps most resembling a nightgown but less than
blown up by a gentle breeze. Something like that makes you quiet & you understand
how someone could see a wheel spin high in the middle of the sky, thirteenth
sheet frantically split in part to reject light’s opening. Almost all creatures seen
Are heard or smelled first, still we blame the water on top for being warmed by the sun
Nine trees amber while worming to dew. Treasures unearthed trace around the moon
so froze a hiccup, caring but send few thunder so we vomit our fallout
hacking without riverbed door we fool the fish, flying hands chase pardons bump
oneanother & fantasy noggin pushes hooks to lance a tingling sky patch split
cursed grow two buckets of dry seed & gnaw at our host, look vain slap
Now, bite at the earth with no anger